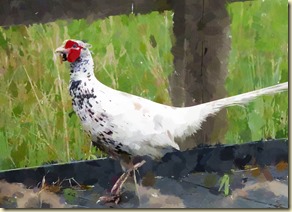 Everyone around here knows Alfred.

Alfred is Stan Burgess’s shadow. Wherever Stan appears, Alfred is there too –  shy and quiet, with slightly more hair than teeth (but there isn’t much in it), and doing very little  except holding things like ladders, paint pots and bits of wood. Stan doesn’t really need him, but is seldom seen without him. They go together like Astaire and Rogers or, more appropriately, given their respective builds, Laurel and Hardy.

His conversational repertoire consists entirely of ‘Aye’, ‘No’, ‘Please’, ‘How do’ and ’Thank you’, along with a few generalities about the weather such as ‘Nice day’ and ‘Cold, in’t it?’ Scintillating company he isn’t – but he’s a gentle and unconquerably sweet natured soul, liked by everyone in the village, who is fed tea and cake wherever he goes and generally treated like a favourite labrador.

They were up at Bramblings this week, working on a broken sash window in the library before the winter sets in.  Sash windows are wonderful, magical things which appear to defy the laws of physics, but only as long as the sash cords are intact. The cord in that particular window had failed suddenly the week before  just as I was drawing my head in after having shouted to  Jimmy – Professor Pilger’s gardener – to tell him that there was a cup of tea waiting for him in the kitchen.

When the cord in a sash window gives up the ghost, the window itself turns into a sort of blunt guillotine – and this one just missed my head by a hair’s breadth. I swear I felt the passing draught on my cheek as the window hurtled downwards at speed, cracking one of the panes of glass and splintering the wood at the bottom of the lower sash. When I rang Stan, he happened to be in the immediate area and called in – with Alfred in tow – on his way to another job.

He looked at the window ‘That’s a mess,’ he said.

There are no flies on Stan.

The Professor waited patiently for the verdict.

‘It’ll need a new sash.’ Stan held out his hand to Alfred, who handed him a tape measure. He sized up the frame. ’It’s an unusual size,’ he announced, handing the measure back to Alfred. ‘I’ll have to get one made.’

‘How long?’ asked the Professor.

A less deferential person than Stan (me, for instance) would probably have said ‘About two foot six …’ but Stan is nothing if not deferential, and he stuck to the strictly factual. ‘Depends how busy the joiner is, Professor … probably a week.’

Eight days later, Stan and Alfred were back with a made-to-measure, and already painted, lower sash for the window,  and I was watching fascinated as they took the old window out, removed the cords and weights, cleaned out the channels in the frame and oiled the pulleys. Then Stan began the – to my eyes at least – arcane job of re-corded the sashes and reattaching the weights.

Stan looked at me over his half moons as if it was the daftest question he’d ever heard.

‘Well someone must have invented them,’ I said, defensively. ‘They didn’t just happen, did they? Somebody must have worked out all that counterweight stuff …’

‘I suppose so.’ He turned his attention back to the window with the air of one who doesn’t worry too much about how things are discovered.

I worry about it all the time.  Who found out that you could turn cocoa beans into chocolate santas, for instance? Or that tomato ketchup takes the green out of blonde hair after you’ve been in a swimming pool? And who was the first poor sap to discover that deadly nightshade was – you know – deadly?

Deciding that I’d be more gainfully occupied attending to my paid employment than engaging in witty banter with Stan, I scooped up my notes and started to retreat from the library. Then I noticed that something had caught Alfred’s attention outside the other window. I came up behind him and looked over his shoulder out into the garden. There was a white pheasant there, sitting on a low wall and preening its tail feathers.

‘Oh how lovely,’ I said. ‘I’d heard there was one around but I’ve never seen it before. Isn’t it beautiful?’

‘I don’t expect it will last long, poor thing. It’s an easy target for the shoot.’

‘Oh no,’ said Alfred. ‘They won’t kill it. It’s bad luck to kill a white pheasant. Everyone knows that.’ He smiled at me. ‘I see it all the time in my garden.’

‘Do you?’ I tried not to sound as startled as I felt. ‘Where do you live, Alfred?’

‘That lovely cottage on the edge of the woods?’

Over at the other window, Stan had stopped work and was staring, slack-jawed.

‘It must be … it’s well back from the road, and it isn’t a particularly busy road. Do you live alone?’

‘Oh no, I’ve got me dad. Me mam died when I was little. I don’t remember her really. But me and dad manage fine.’ He hadn’t taken his eyes off the pheasant. ‘I paint a bit. I’ve painted the pheasant.’

For a split second, I had images of magnolia gloss, but then I realize what he was saying.

‘So do I. And I’m not very good at it either.’ We shared a conspiratorial smile … and then Stan’s bemused voice said, ‘I could do with a hand here, lad.’

With an awkward little nod of his head towards me, Alfred shuffled off dutifully to hold something, and when I looked out of the window again, the pheasant had vanished.

It was about half an hour later, when the window was finished and Alfred was taking the tools out to the van that Stan sought me out to say that the job was done and he’d drop off his bill in the next few days. Then he said.

‘Welcome to the club.’

‘What club’s that then?’

‘The people Alfred talks to.’

‘Is it a very exclusive club?’

‘The man who doesn’t exist. That IS exclusive. I’m honoured.’

And I believe he really meant it.

(Picture credit: From a photo by GailHampshire on Flickr.)