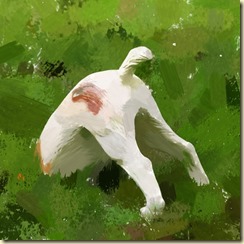 Adam was doing an excellent impersonation of a country hick, leaning on the fence with a piece of grass in his mouth,watching me as I picked the slugs and snails from around my newly planted hollyhocks and hurled them viciously into Maggie’s field. He’d been hedging since late morning, but had finished for the day and was loitering in the hopes of a cup of tea.

‘What?’ I straightened up and eased the crick in my back.

‘Yes.’ He shifted his weight from one foot to the other. ‘They have a homing instinct. Throw them any less than that, and they just come back. Throw them further, and they get lost. I’m surprised you don’t know that … typing the Prof’s book for him and all.’

‘We haven’t got  onto the homing instincts of slugs yet. He’s still lingering over their really bizarre sex lives. What do YOU do about slugs and snails?’

‘Grow marigolds, encourage frogs and toads, bribe the village kids to collect them … but mostly go out with a torch on a wet night and scoop the little beggars up, then despatch them to Happy Valley.’

‘Happy Valley? Is that a euphemism for ending their miserable, misbegotten lives?’

‘Of course not. I live in peace with nature.’ He made himself more comfortable on the fence. ‘Happy Valley is the bottom end of my place, past Wittenshaw Beeches. Slug heaven.’

‘You retire your slugs to Slug Heaven?’ I lobbed another one into the field. ‘How sweet. I came out the other night with the dogs, in the rain, and the patio was awash with slugs and snails. I stopped counting when I got to 50. They’ve destroyed my cape gooseberries, made hash of my acanthus, and felled a five-foot high sunflower.’

‘Ah now. Sunflowers they love.’ He looked around curiously, as a thought struck him. ‘Speaking of your dogs – where are they? They’re unnaturally quiet.’

It was a good point. Normally, the sound of Adam’s – or indeed anyone’s – voice in the front garden would have brought them hurtling from the house, shrieking the odds and throwing themselves at the intruder with psychotic intent. But they were quiet. They were suspiciously quiet. I looked at Adam. He looked at me. We both looked around the garden, listening. Nothing.

Then, a horrid thought occurred to me. ‘My spring bulbs. I bet those depraved little sociopaths are digging up my bulbs again ….’

Clambering to my feet, I waddled stiffly around the side of the house (my knees aren’t  as biddable as they once were) and heard the ‘clink’ of the gate as Adam followed. Sure enough, the Boy Dog and the Old Girl were around the back, quietly laying waste to my newly-planted bulbs. All you could actually see of them was two enthusiastically waggling  bottoms as they scrabbled at the freshly dug bed, showering soil and crocuses all over the patio.

The Boy Dog immediately shot off into the shrubbery, ears down, tail down and belly dragging on the ground. The Old Girl however just stood there looking at me dispassionately over her shoulder for a moment before carrying on where she’d left off. Adam snorted but wisely kept his mouth shut.

‘BLOODY DOGS!!!!.’ Stomping bad-temperedly across the patio, I grabbed the Old Girl around her barrel chest and hauled her from the hole, whereupon she immediately started galloping wildly in mid-air as if she’d decided belatedly to make a run for it, but hadn’t noticed that her feet were no longer on the ground. Boy Dog meanwhile  watched the pantomime from the safety of the azalea but wasn’t, I noticed, bothering to look remotely guilty any more – just very, very interested.

Retreating to the utility, I dumped the Old Girl unceremoniously in her bed and came out to find Adam collecting up all the crocus bulbs. ‘Got a broom?’ He asked. ‘If you sweep the soil back into the bed, I’ll replant these for you.’

‘You’re a cherub, Adam. Thank you.’ I fetched the yard broom and started sweeping. ‘But how do I stop them? This is the second time it’s been dug up’. I thought about that statement for a moment. ‘Actually, it’s the third time … but the first time, it was a cat.’

‘Or possibly bean netting. Do you have any? If not, I’ve got some.’

I had some. I even knew where it was, I fetched it, and flourished it triumphantly like a magician producing a rabbit from a hat … and what Adam did with it was so simple I kicked myself for not thinking of it. Instead of stretching it out as I expected, he scrunched it up and then pegged it down firmly enough to keep it in place but loosely enough to keep it mobile and tangly.

‘Thank you.’ He got to his feet and brushed the dirt and dust from his baggy cords. ‘That should confuse them.’

Boy Dog chose that moment to emerge, very cautiously, from the shrubbery and sniff the netting. We watched him. He sniffed, he peered and then he reached out a paw to touch – only to retract it again in confuddlement. The look he turned on me said, more clearly than any words, ‘How COULD you?’

I paid Adam for his help in tea and rock cakes and returned to the serious task of hurtling slugs into Maggie’s field, secure in the knowledge that my spring bulbs were now safe from the predations of Jack Russells.

The next morning, I wandered out into the garden clutching a mug of tea and a slice of hot buttered toast to admire our handiwork … and the toast turned to ashes in my mouth. Ashes, I tell you.

The netting was still in place, only now it was neatly protecting four very large molehills.