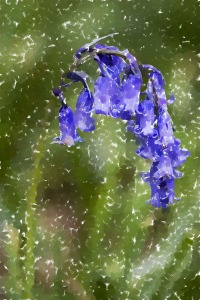 ‘Do you know your bull is eating my rosa rugosa?’ I said to Maggie-the-Farmer across her kitchen table, after chasing Bovine Boris off my front hedge yet again.

She smirked irritatingly over the piece of beef she was wrapping and labelling. ‘You hum it and I’ll play it.’

‘But he’s not my bull. He’s Ronald Benson’s bull. I just borrow him for the girls.’

‘Ronald or the bull?’

She raised a silently disapproving eyebrow and pushed the plate of rock cakes across to me. ‘Just biff him on the nose. He’ll soon get the message …’

The first time I had the questionable pleasure of making Bovine Boris’s acquaintance I was outside my front gate dragging goosegrass out of the rose hedging and wondering if I could eat it. Out of the corner of my eye, I saw a huge something lumbering down the lane towards me, and when I turned my head to look properly I found myself eye-to-nostril with the most enormous brown and white bull I had ever seen in my entire life. It was as wide as it was tall and you could have eaten a meal off its massively broad forehead.

I peered carefully past it up the lane, looking for an accompanying human, but could neither see nor hear anyone; which is when I started to back, v-e-r-y carefully, towards my gate. Once safely inside the house, I grabbed the ‘phone and rang Maggie.

‘Introduce yourself,’  she replied – rather unhelpfully, I felt. ‘That’s Boris. He likes having his nose scratched.’

‘No. We just let him out and he finds his own way home. He’s harmless. Big dafty, really … especially when he’s been in with the girls.’

Since then, I’ve got used to seeing Boris wandering around, but his fondness for my roses is threatening our budding inter-species understanding. The first time he started munching on them, I tried a few ineffectual ‘Shoo’ noises. The next time, I was braver and actually left the safety of my garden and laid hands on him in an attempt to push him away. I’d have had more luck shoving a pile of bricks – only a pile of bricks wouldn’t have stepped on my foot.

And so it was that I limped up to Maggie and found her at her kitchen table, along with Alec, her farmhand, surrounded by chunks of recently butchered beef and mountains of polythene bags.

Alec snorted, reaching for another bag. ‘They have very sensitive noses. Maggie’s right. He’ll get the message.’

‘And he won’t charge at me or anything? Only in a straight contest between Boris and my hedge, I know who’d win.’

‘Bulls are very placid creatures,’ Maggie explain patiently. ‘Not to mention lazy. He’ll just look reproachful and go home.’ At that, she dumped a large bag of beef offcuts in front of me. ‘Here. Put that in your freezer. There’s plenty to go round.’

‘Ooh gosh, how lovely. Are you sure?’ ‘Of course. If you ever grow anything in that God-forsaken wilderness you call a garden, you can bring me your firstborn.’

‘In that case, thank you very much.’ I clutched the package gratefully to my bosom, suddenly feeling much more kindly disposed towards country living, and was about to head back to the cottage when I remembered that the last time I’d been at the farm, the local vet had been there, tending to one of Maggie’s cosseted and much-loved milkers. Bluebell, I was told, had ‘lost another quarter’.

Maggie and Alec looked up at me with identical crooked smiles on their faces, and then their eyes came to rest on the meat in my arms. ‘She’ll make lovely burgers,’  said Maggie, consolingly.